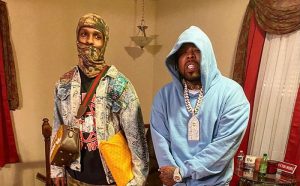 Westside Gunn and A$AP Rocky got a chance to build just before the festivities of Coachella kicked off. According to the Griselda rapper Gunn, the two New York emcees linked and hung out for hours. He said they even got a chance to make music, and Rocky laid a verse for MICHELLE RECORDS.

It’s uncertain when and where Westside Gunn will debut this track, but last year he did promise fans a joint with him A$AP, Playboi Carti, and Metro Boomin’.

Although we haven’t got that yet, there was an unofficial track with them two on Soundcloud called “Hermes Handgun.”

Westside Gunn’s popularity rose in the rap game due to his phenomenal catalog, including Pray For Paris, Flygod Is An Awesome God 2, and his Shady Records debut Who Made The Sunshine. Westside Gunn’s name will keep heading up whenever this track with him and A$AP Rocky drops.

Coachella is set to kick off on April 15, and while A$AP Rocky isn’t a part of the line-up, Westside Gunn is. Gunn will be performing on Sunday, Doja Cat, J.I.D., Denzel Curry, Vince Staples, Maxo Kream, Channel Tres, and many more.

The post Westside Gunn & A$AP Rocky Link Up for Studio Session Prior to Coachella appeared first on The Source.

Despite some apparent internal strife amongst the core trio over their unbalanced contracts, it looks like Griselda Records‘ Benny The Butcher, Conway The Machine, and Westside Gunn are still on good enough terms to head out on tour together, which they’ll do following their upcoming appearance at Coachella. Their Claires Back Tour kicks off May 10 in Chicago and will hit 10 venues in total, crossing the nation to conclude on June 3 in Los Angeles. They’ll be joined on the tour by Future’s Freebandz artist, Doe Boy.

After releasing their major-label debut album WWCD on Shady Records in 2019, the Buffalo big three has spent the last handful of years dropping multiple solo projects, although they all appear on each other’s material as well. Meanwhile, the label as a whole has grown to encompass a wide range of underground approved acts such as Armani Caesar, Boldy James, Mach-Hommy, and Stove God Cooks. However, that success didn’t stop Conway from revealing that he left the label after completing his contracted obligation with God Don´t Make Mistakes earlier this year.

In a recent interview with The Breakfast Club, Conway said. ” “I didn’t even read that contract, bro. I didn’t read that shi*t. I just signed that sh*t and moved on. Unfortunately, the contract wasn’t in my favor. So now, going forward, it’s time to redo all that. I gotta make sure it’s in my favor now.” Hopefully, those issues won’t negatively affect the vibe on their tour. You can find more information about the Claires Back Tour here. 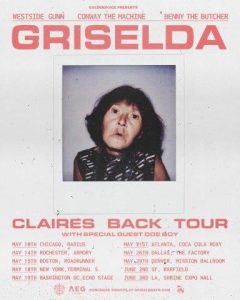 The Buffalo, NY-based hip hop collective Griselda recently announced a run of ten gigs around the US this spring. After performing at Coachella this April, Griselda will embark on their nationwide Claires Back Tour starting in Chicago on May 10 and finishing at the Shrine Expo Hall in Los Angeles on June 3. On May 15, the band will perform at the brand-new Boston venue Roadrunner as part of their tour. Tickets go on sale at 10 a.m. local time on Friday, March 25 at http://www.griseldaxfr.com/.

This will be Griselda’s first tour since they sold out back-to-back gigs at the Novo in Los Angeles in 2020. Since then, the band has been active, releasing critically acclaimed albums and performing at festivals like Day N Vegas, Made in America, and Rolling Loud.

You can see the full run of dates below.

The post Westside Gunn, Conway the Machine, and Benny the Butcher Announce Spring Griselda Tour appeared first on The Source.

Conway the Machine is just a few weeks away from releasing his next album, God Don’t Make Mistakes. The project will be his first album since 2020’s From King To A God. That project was one of many albums that Griselda released over the course of that year including Westside Gunn’s Pray 4 Paris and Benny The Butcher’s Burden Of Proof. Ahead of the arrival of God Don’t Make Mistakes, Conway, Westside, and Benny bring their lyrical talents together for “John Woo Flick.” On the track, the Griselda trio goes to work by showcasing their top-notch lyricism over the song’s haunting production.

This year could prove to be another big one for the Griselda crew. Their first offering will be Conway’s God Don’t Make Mistakes which is set to arrive on March 25. Next up will most likely be Benny’s Tana Talk 4. While a release date for that project has yet to be revealed, the rapper recently shared its latest single, “Johnny P’s Caddy” with J. Cole, so the project may arrive sooner than later. As for Westside Gunn, it remains to be seen if he’ll deliver a project this year as he dropped off the double-disced Hilter Wears Hermes 8 last fall. That project came after he released Pray 4 Paris and Who Made The Sunshine in 2020.

You can listen to “John Woo Flick” in the video above.

God Don’t Make Mistakes is out 3/25 via Shady/Interscope.