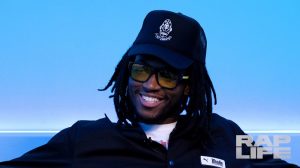 Earlier this year, Saba dropped off his new album Few Good Things. The stellar effort brought in collaborations with G Herbo and Krayzie Bone. Now Saba has his eyes on another collaboration with No I.D.

Appearing on Apple Music 1 with Ebro Darden, Sabab talked about the Few Good Things album before revealing he received 120 beats from legendary producer No I.D. for a future project.

A collaboration between the two Chicago natives would be epic, Saba added that No I.D. was one of the first to hear the Few Good Things album:

I played the album for No I.D. before it was finalized. I’m just like, “Hey, these are the songs I’m working on. I’m about to finish it up. This is the album.” I had 10 records that I played for him, and he gave me some notes, and they was really solid…one thing that he pointed out, he was like, “You did all of the musical shit, but I’ve been to your show before, and you had motherfuckers out there moshing, doing all type of other crazy shit that you didn’t do yet on this album. You need to do that.” And to me, that was like just a oversight, where it was something I didn’t even think about. It was like some legend advice to me…But to me, the most important thing he said, he was like, “You need a new closer.” He was like, “If you play… When you tour this album, without these new records, you’re going to still be closing with the big song from your last album.” He was like, “You can’t do that.” And I was like, “That’s something I didn’t even think about.” And it was the best…it put the battery in my back and got me back to work, and I went home, and “Survivor’s Guilt” was the first beat that I made.

You can see the entire conversation between Saba and Ebro here.

The post Saba Teases Collaboration with No I.D. After Receiving 120 Beats appeared first on The Source.

Chicago rapper Saba continues the rollout for his introspective new album Few Good Things with the video for the previously released single “Come My Way” featuring Krayzie Bone of Bone Thugs-N-Harmony. The video is fairly straightforward, mostly featuring Saba rapping into the camera outdoors broken up by interior scenes of Saba rapping alongside the members of his Chicago-based crew, Pivot Gang. No stranger to the group dynamic, Krayzie Bone joins them like an unofficial sixth member as he raps his contribution to the reflective song.

The video for “Come My Way” follows the release of Saba’s short film, also titled Few Good Things, which echoed the theme expressed across the album and songs like “Come My Way”: Acknowledging the good things that make life worth living, even when horrible things are happening to make it seem like it’s not. That message has special resonance in light of the past year for Pivot Gang, who suffered the second death of a member when Squeak, the group’s DJ and producer, was shot to death in Chicago in August. The group previously lost member John Walt, Saba and Joseph Chilliams’ cousin, to a stabbing in 2017 and has commemorated him with their annual John Walt Day concert ever since.

Few Good Things is out now via Pivot Gang LLC.

Saba’s ‘A Few Good Things’ project is out now.

After releasing his long-awaited third studio album, Few Good Things, Chicago rapper Saba followed up last night with the premiere of the album’s accompanying short film, also titled Few Good Things. Like the album, the film, directed by C.T. Robert, casts its focus on the themes of family and community, as well as the comforting memories that grow from each. A series of vignettes, home movies, and photo albums soundtracked by the album highlight the good things that Saba is holding onto.

In an artist’s note, Saba said of the film, “The concept of Few Good Things is the realization of self after a search for exterior fulfillment. It is the satisfaction and completeness you gain by simply living a life that is yours. Few is a small number, but few is not lonely. In the face of all adversity, a few good things is recognizing and accepting blessings. Few is to count them, one by one. An empty glass is full of air. An empty bank is full of lessons. An empty heart is full of memories. Few good things is to grow comfortable with the empty, and despite that, finding your fullness.”

Saba’s new album, Few Good Things, is out now after a rollout that included smooth singles like “Come My Way” featuring Krayzie Bone and “Survivor’s Guilt” with G Herbo, as well as a short film touching on the album’s theme of family, home, and finding peace. Although it hasn’t been out long, it’s clear that the fan-favorite standout from the album is “Still,” which features Atlanta crooner 6lack and St. Louis rapper Smino as all three contemplate long-term love in all its forms.

In Saba’s verse, the Chicago rapper touches on his love for his work and how it conflicts with his love for his significant other, while on Smino’s verse, the soulful St. Louisan offers a scintillating take on a long-lost relationship, wondering if she kept his things around. 6lack’s chorus brings things full-circle, as he contrasts his superstar lifestyle with the toll it takes on his home life.

In addition to the videos and short film, Saba is preparing a promotional tour for the album set to run through March, April, and May supported by Dreamville rapper Lute and the Los Angeles singer Amindi.

Listen to Saba’s “Still” featuring 6lack and Smino above.

Few Good Things is out now via Pivot Gang, LLC. You can stream it here.