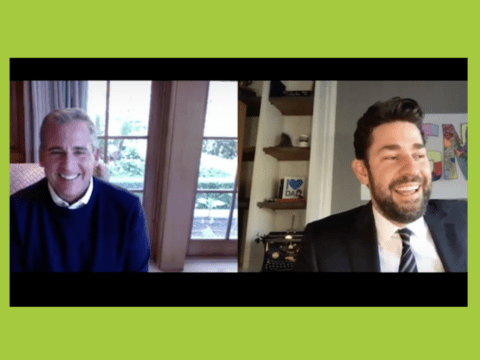 “The Office” is officially 15 years old. The unforgettable show’s stars Steve Carrell and Jim Krasinski gave diehard fans a much-needed reunion this past weekend to reflect on the NBC series’ epic run.

On Sunday, Karsinski welcomed Carrell into his “Some Good News” YouTube video series. During their 15-minute chat, they remembered how much the show changed their lives and dished on the impact it continues to have on fans.

“It’s such a happy surprise that, after all these years, people are still tuning in and finding it, which is pretty cool,” Carell said during the episode, which dropped on Sunday. The co-stars then reminisced about some of their favorite moments from The Office. For Carell, those included exchanges about his character’s micro flat screen TV on “The Dinner Party” episode and experiences the actors “shared as a cast,” like doing the “fun run” in the heat. In addition, Krasinski said filming the scene where Jim said goodbye to Michael was “emotional.” (E! Online)

Carrell also focused on how much the cast supported each other. They both shared a few of their most memorable on-set moments.

“Part of what was so much fun about it is that everybody in the cast was rooting for everybody else,” Carell said. “People would step back when it was time for other people to shine, and celebrated. When you came in as Dwight that day — it was crazy, watching Jim do Dwight.” Carell highlighted the popular “Dinner Party” episode — the scene where Michael shows Jim and Pam (Jenna Fischer) his tiny, wall-mounted plasma TV — as one of his favorite memories from filming the show. Krasinski added, “I don’t think I’ve ever laughed harder in my life.” (Washington Post)

During the show’s epic run, there were a few handfuls of unforgettable moments. One episode featured Steve Carrell and co-star Rainn Wilson doing an N.W.A. “Straight Outta Compton” parody clip.

At the end of rapper Rich Brian‘s “Arizona” song, he shares a hilarious skit referencing “The Office.” To make things extra weird, Brian made up a fictional ending to Carrell’s Michael Scott character.