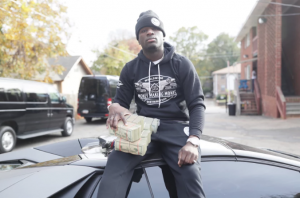 After awaiting trial in the Dekalb County Jail since his federal arrest for marijuana trafficking in 2018, 1017 artist Ralo, whose real name is Terrell Davis , can breathe a sigh of relief after being sentenced to eight years in federal prison.

Why? Well, after the time served granted by a federal judge and Ralo receiving his anticipated good time, which could be up to a year and a half, the accused drug trafficker and ATL mainstay could see the streets as early as next year.

On an IG post from Ralo’s verified account, where the news of his sentence was also confirmed, an update on the sentence handed down said, “He was recommended 1 year ankle monitor after the halfway house approve his home address; which will bring him home to us late next year, but our goal is for him to complete his GED or RDAP Drug program so we can get another year off his sentence. That will bring him home to us in less than a year. We need prayer.”

In 2018, an affidavit filed by the U.S. Attorney claimed Ralo was the leader of a street gang called “Famerica”, that is known to have smuggled almost $2 million worth of weed from Cali to Georgia.

Atlanta rapper Ralo finally received a sentence in his marijuana trafficking case. Ralo, who is signed to Gucci Mane’s 1017 label, was arrested back in 2018 and accused of trafficking over $2 million in marijuana. The charges alleged that he was selling drugs from an apartment complex he rented in Atlanta while also flying nearly 1,000 lbs. of marijuana from California. Despite his arrest in 2018, it would take Ralo almost four years to receive a court date, as he did at the start of the year. Less than fifth months later, a post to his Instagram account revealed that he was sentenced to eight years in federal prison.

Despite the nearly decade-long sentence, it will be cut in more than half thanks to time served that was granted to him. “The Judge sentenced Ralo to 8 years in Federal Prison, he was given over 4 years credit time served,” the post reads. “The BOP has also credited him 1 & 1/2 year for good time.” The message goes on to reveal that he will most likely be home late next year, with the possibility of his exit from prison being as early as less than a year from now.

It remains to be seen how it will all play out, but the silver lining of it all is that Ralo will be home much sooner than expected.

The incarcerated members of Gucci Mane’s 1017 label are having a rough news week, with Pooh Shiesty agreeing to a plea deal in his federal firearms case that could see him serve 97 months or more in prison. Now, fellow 1017 rapper Ralo can look forward to his day in court, as he announced that a date has been set for his marijuana trafficking trial — nearly four years after his initial arrest.

“After 4 years of being dragged through all these different jails and COVID BS, I finally got a date set March 15,” he wrote in a caption on his Instagram alongside a photo of himself in better days. “If I ever did anything to hurt you, I ask that you forgive me. I don’t wanna walk in that courtroom with no bad vibes, I need prayers for me and not AGAINST me. It’s some people that love and need me free. Go to FAMERICANEWS.COM to help.” Meanwhile, it appears he’s still honing his craft behind bars, adding, “On another note the feds finally allowed my music to be sold in they prison system, so tell anybody you know in the feds to go download all my music off the Corrilinks system.”

Ralo — real name Terrell Davis — first captured the interest of trap rap fans in 2015 with the release of his single “Can’t Lie,” featuring Future. He was arrested in 2018 for possession with intent to distribute, with authorities accusing him of selling drugs from an apartment complex he rented in his native Atlanta, flying nearly 1,000 lbs. of marijuana from California