At some point in the not-so-distant future, Megan Thee Stallion is set to release a new album (which appears to be called Traumazine). Ahead of then, Meg has gone ahead and pulled back the curtain on the upcoming project a little bit via Twitter.

Last night, Megan started responding to fan tweets, with one fan asking, “You said the album was a lot of self-reflection. What inspired you to take this route for the album?” She replied, “I wrote this album for myself… I wanted to start writing in a journal but I said f*ck it I’ll put it in a song.”

Somebody else asked how long the tracklist is and Meg noted it’ll have 18 tracks. Another user wondered, “Was it hard for you to write songs for this project.” Meg answered, “Yes very [pleading face emoji] saying certain things you’ve never said out loud before is hard.”

A user asked if any songs on the album are going to be longer than two minutes and Meg said, “Now y’all know ima 3 verse type of girl so yes lol.”

Shortly after that, Megan decided she had spilled enough tea, tweeting, “Ok wait actually let’s not talk abt this tonight lol.”

Check out the tweets below.

I wrote this album for myself… I wanted to start writing in a journal but I said fuck it I’ll put it in a song https://t.co/kDAmLqQbou

Ok wait actually let’s not talk abt this tonight lol 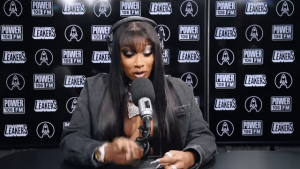 Megan Thee Stallion hit L.A. Leakers and lit the microphone on fire with her freestyle.

While sitting next to DJ Sourmilk and Justin Credible, Thee Stallion revealed her second album is on the way. During her freestyle, Thee Stallion attacked Warren G and Nate Dogg’s classic “Regulate,” making for an impressive showing.

You can hear her go off below.

Recently, Megan Thee Stallionteamed with Future to release her new single, ‘Pressurelicious.” The new hit is produced by HitKidd.

The new sensual single displays the confidence of a woman who is aware of what she brings to the table and how a partner takes it all in.

“Pressurelicious” follows “Sweetest Pie” with Dua Lipa and “Plan B,” which arrived in April.

You can hear the new single and see the video below.

On August 4, out of the blue, Megan Thee Stallion shared the definition of the word “traumazine,” which read, “the chemical released in the brain when it is forced to deal with painful emotions caused by traumatic events and experiences.” Given that it’s a cool-sounding word and relevant to Megan’s recent experiences (most notably the whole Tory Lanez fiasco), it was quickly rumored that Traumazine would be the title of Meg’s next album. Now, it appears she may have confirmed it.

Today, the rapper shared a quick new teaser video, which is set at a rainy outdoor funeral and shows Megan, wearing all black, placing a black rose on a casket. Then, in comes a different version of Meg, this one wearing all white. After that reveal, the word “traumazine” is shown on screen. The post is captioned, “It almost that time…”

It almost that time… pic.twitter.com/oLEgn84CgG

Given that the video doesn’t exactly specify what “Traumazine” is, this doesn’t count as a confirmation of the album’s title (it could be just a song, after all). It sure does look like a confirmation, though.

Also relevant is that Megan recently shared a message about her album, writing on an Instagram Story last month, “So happy abt my album. It’s finished. It’s for the hotties. It’s honest. It’s me. It’s real.”

With both Dwayne “The Rock” Johnson and Megan Thee Stallion preparing new projects — DC’s League Of Super Pets for him, a new album for her — you might have expected both to be in the news cycle a lot this week. However, you probably wouldn’t have expected them to be in news posts together, since those projects are in separate media. But when The Rock was asked which celebrity’s pet he’d most want to be — an innocuous enough question, and on-theme for the film he’s promoting — worlds collided in a most hilarious and borderline bawdy way.

Johnson cheekily (and quickly) replied Megan Thee Stallion, which instantly sent the internet into a tizzy. While it’s obvious that Megan pampers her dogs 4oe, 5ive, Dos, Six, X, and Oneita, it was equally obvious that Johnson had other benefits in mind. Just look at that face!

not Dwayne “The Rock” Johnson saying he’ll be Meg Thee Stallion dog when they asked him who celebrity dog he’ll be . LMFAOOOOO I FEEL YOU MY BOY . pic.twitter.com/bzqsqerqHX

Of course, Meg’s been spoken for, and her boyfriend, fellow rapper Pardison Fontaine, hit Twitter with his response, writing, “All our dogs named after #s. Just teach your wife to use seasoning. You’ll be iiight … Moana is the shit tho.” Fans had a field day with his reaction, wondering how a real-life confrontation between the rapper and ex-wrestler might go. It didn’t exactly shake out in Pardi’s favor.

Pardi ain’t did nothing to 5’4 Tory Lanez who shot his chick . Wtf he gonna do with 6’5 270 nigga used to wrestle for a living named The Rock lmaooooo https://t.co/3oEaD6ebp1

Pardi really in a tough spot. The Rock has more money than him, is more famous than him, and can beat his ass.

The male ego really isn’t built for this kind of assault. https://t.co/vwSGzxmf1k

Naturally, after a few hours of this treatment, he deleted the tweet and changed tactics. “Of all the things to be worried about y’all think I’m mad at the Rock,” he cracked. “The comment started all our dogs #s and ended with Moana is my shit

.. I deleted it (yesterday).. cus it seem like ppl took it wrong .. thought maybe my joke was in poor taste.”

.. I deleted it (yesterday).. cus it seem like ppl took it wrong .. thought maybe my joke was in poor taste

Nah, man. You walked into that one. Good to see he’s taking it with good humor though. League of Super Pets is out now. Meg’s album is coming soon.

Megan Thee Stallion has been teasing her new album for a long time now, with songs like “Plan B” and “Pressurelicious” helping build up anticipation to unimaginable heights. Today, she raised it even higher by sharing a freestyle she did on Power 106 Los Angeles on Twitter.

“GRIND MODE IT’S ALBUM TIME HOTTIES GO CHECK OUT MY LA LEAKERS FREESTYLE,” she wrote while sharing the video, which quickly went viral. At a little over a minute and a half, the song is full of great quips that have fans flipping out in the replies. It’s performed to the instrumental from Warren G’s “Regulate” feat. Nate Dogg, which samples Michael McDonald’s “I Keep Forgettin’.” Megan’s rap touches on a lot of topics, including her ongoing feud with her record label 1501 Certified Entertainment: “How you want to be me, at the same time want to shake me / I be makin’ money on the motherf*kin’ daily / Got my label mad but them n****s gotta pay me.”

In an Instagram story late last month, the rapper announced that her next LP is done. “So happy abt my album,” she wrote. “It’s finished. It’s for the hotties. It’s honest. It’s me. It’s real.” 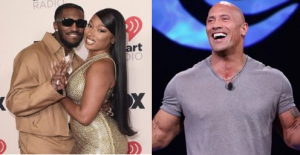 During a promo run for his latest animated film, Dwayne “The Rock” Johnson was asked during an interview who’s celebrity “pet” would he be. The former wrestler turned movie star answered saying he would want to be Megan Thee Stallion’s pet.

When asked why Meg, The Rock said “We don’t have to talk about that.”

The clip went viral over the weekend, and even caught the attention of Megan Thee Stallion’s boyfriend Pardison Fontaine. Pardi took to IG where he cringeworthing-ly clapped back at The Rock for his innocent answer.

On IG he posted the video of The Rock making his “pet” comment and wrote in the caption “All Our dogs is named after #s… Just teach ya wife how to use seasoning… You’ll be iight… Moana is the shit tho,” Pardi wrote.

It is unclear what he meant by “all out dogs is named after #s,” but social media clowned Pardi for his awkward response to The Rock.

The post Megan Thee Stallion’s Boyfriend Claps Back At Dwayne “The Rock” Johnson Over “Pet” Comment appeared first on The Source. Dwayne “The Rock” Johnson took to Instagram to share a snippet of a recent interview alongside Kevin Hart for their upcoming movie, “DC League Of Super-Pets”. During the interesting interview, he admits to wanting to be Megan Thee Stallion’s “pet rock.” During the interview, the two actors were asked a few questions—where one question that […]

The post The Rock Wants To Be Megan The Stallion’s Pet “Rock” appeared first on SOHH.com.