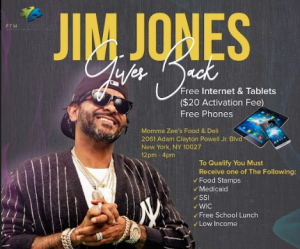 The goal of this event is to provide people who received state or federal benefits or people from low-income areas receive free internet access. In order to qualify for the phone or tablet, you must be currently receiving:

The names are run through a national verification system and if approved, the person will receive their tablet or phone device. There will only be 250-300 phones and tablets at the location, so the devices are on a first-come, first-serve basis. Please bring a valid ID or your benefits card to apply. There is a twenty-dollar activation fee for the phone and tablets. PTM Consulting, are also open to hiring people who would want to provide phone and tablet service to the community.

Giving phones and tablets that have free internet access.

The post Jim Jones, Aisha Hall, Shawana King “GIVE BACK” Phones And Tablets To Their Harlem Hood appeared first on The Source.

For the past few years, DJ Drama’s work has come through supporting another artist. Most recently, he served as a host on Tyler The Creator’s sixth album Call Me If You Get Lost which was modeled after Drama’s Gangsta Grillz mixtape series. The project went on to win Best Rap Album at the 2022 Grammy Awards, giving Drama his first Grammy. Elsewhere, Drama helped bring the careers of Jack Harlow and Lil Uzi Vert to new heights as both artists are signed to Drama’s Generation Now label which was co-founded with Don Cannon.

Prior to the aforementioned instances, there was a point when DJ Drama was releasing his own albums as the last one, Quality Street Music 2, arrived back in 2016. It appears that Drama might have a new body of work on the way as he returns with “Forever” alongside Fabolous, Benny The Butcher, Jim Jones, and Capella Grey. The records speak about establishing longevity in their careers, and this gets accomplished through verses from Fabolous, Benny, and Jim while Capella took care of the song’s hook.

The record also stands as Drama’s first single as a lead artist since 2019’s “Nasty” with Moneybagg Yo and Pnb Rock.

You can listen to “Forever” in the video above.

New album on the way? 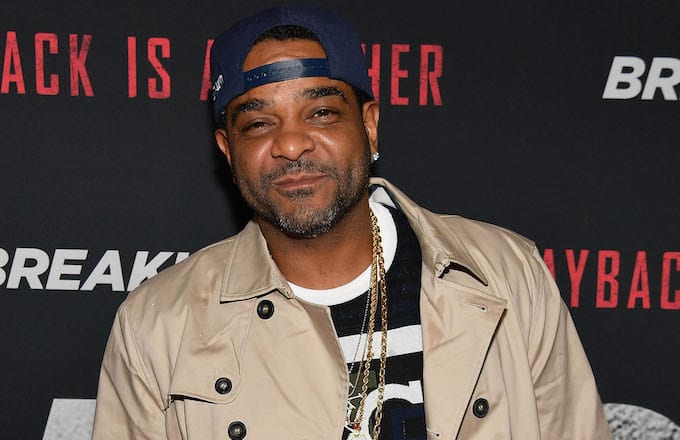 Lil Tjay was the victim of a near fatal shooting last week. Many musicians and fans alike sent out well wishes to the Destined 2 Win artist. Jim Jones even recently came out to share his words of encouragements to Tjay, and doubling down on his comments about being a rapper is “the most dangerous job.”

When speaking with HipHopDX, Jones was asked about his comments regarding rap being the most dangerous job, and he used LIl Tjay’s situation to back up his comments. “I stand on it,” Jones said. He then added “we have more rappers getting killed than we have weeks in the year. Shit, my prayers go out to Lil Tjay who just got shot up the other day, and I don’t even know his condition but, you know, it’s terrible out there. Every day they talk about a different rapper that just got shot or was involved in a shooting or something like that.”

Even though a motive has not been discovered for the attack on Lil Tjay, Jones said that the shooting might have been over money.

Following the shooting, Lil Tjay was rushed to the hospital and underwent emergency surgery. At the time, he was in a questionable state, with doctors not knowing if he would survive. Recent reports indicate that since then, Tjay has been making significant progress towards recovery.

TMZ reported that Tjay is “awake and alert” and doctors were even able to remove his breathing tube. His voice also sounds like it did before the tragic incident.