Skip to content
Featuring Wiz Khalifa, Curren$y, Smino, and more.
The Forever Story, coming real soon.
A collection of our favorite songs of the week. 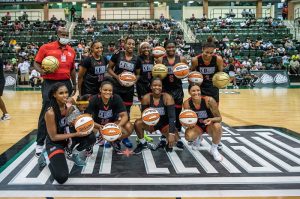 The Dreamville Chi-League powered by Wilson and Wilson Sporting Goods Co. announce the return of the famous Chicago pro-am league, now known as the Dreamville Chi-League powered by Wilson. Wilson, the NBA and WNBA’s official game ball supplier, is teaming up with Dreamville, one of the most popular and powerful entertainment brands today, to stage a four-week tournament in Wilson’s hometown of Chicago as part of its commitment to the basketball community.

“Last year’s Chi-League was a tremendous success, showcasing local basketball talent and bringing the city of Chicago together through sport,” said Kevin Murphy, General Manager, Wilson Team Sports. “We’re always happy to give back and produce events in the city Wilson has called home since 1914. Continuing our partnership with Dreamville, we know this year’s extended schedule featuring both men and women will truly be something special.”

The 2022 Dreamville Chi-League powered by Wilson will take place every Saturday in August at a new venue — the University of Illinois Chicago – and will include eight teams in men’s and women’s divisions. The league will hold a play-in on Aug. 6 for clubs to qualify for the three-week, single-elimination tournament, which will take place on Aug. 13, 20, and 27. International stars, past collegiate stars, local legends, and current NBA players such as Darius Garland, Kendrick Nunn, Keifer Sykes, and others are expected to return to the league.

“We are excited to be back this summer. The Chi-League helps to further unite our brand with the beloved city of Chicago by intersecting entertainment, sports and community,” said Candace Rodney, Dreamville EVP. “Following the success of last year’s inaugural pro-am, especially the nail-biting end to the men’s championship game, Dreamville and Wilson are coming bigger and better to produce another amazing tournament year.”

Throughout August, Wilson will release limited-edition Dreamville products to honor Chicago communities, carrying on their long-standing basketball history and the music industry’s vital role in sports culture. As part of its national cooperation with the YMCA of the USA, Wilson and Dreamville will once again collaborate to provide community involvement opportunities, including youth basketball clinics. During Chi-League, Wilson will expand local programming at the South Side YMCA, Rauner Family YMCA, and Kelly Hall YMCA, all of which are part of the YMCA of Metropolitan Chicago.

“Last season was the best pro-am I’ve been a part of, and I couldn’t be more excited to see what’s in store for this season,” said Antoine Walker, Chi-League Coach, and three-time NBA All-Star. “The history of this league is something to be celebrated and I’m proud to see its continued success.”

The post SOURCE SPORTS: Dreamville and Wilson Announce the Return of Chi-League Pro-Am appeared first on The Source.

The NBA may be winding up its 75th season soon, but basketball never stops. Summer hoops are an annual tradition, with the AAU season and summer pro-am leagues and tournaments kicking off even now (come on down to LA’s Drew League, where some of the best players in the world compete in the longest-running pro-am in America). A new name is about to join that illustrious collective, and it’s one that already has a longstanding tradition of its own of combining hip-hop and hoops: J. Cole’s Dreamville.

Dreamville is partnering with Wilson Sporting Goods Co. to announce the Dreamville Chi-League, a four-week tournament running throughout the month of August at the University of Illinois Chicago. The league will be co-sponsored by Gatorade and will pit eight teams of pro players, from NBA stars to overseas standouts, and local legends against each other for summer hoops glory. There will be men’s and women’s divisions, too, giving an equal opportunity to shine to all.

Wilson will be dropping limited-edition Dreamville products throughout August while hosting youth basketball clinics alongside the YMCA. Former NBA star Antoine Walker, who coached in a springtime iteration of the tournament, said in a statement, “Last season was the best pro-am I’ve been a part of, and I couldn’t be more excited to see what’s in store for this season. The history of this league is something to be celebrated and I’m proud to see its continued success.”

It remains to be seen whether Cole himself will lace up to participate in the league after playing out his contract for the Canadian Elite Basketball League’s Scarborough Shooting Stars, but it wouldn’t be a surprise, given how much he loves to play. I guess the only way to find out is to show up! You can find more information at dreamvillechileague.com.