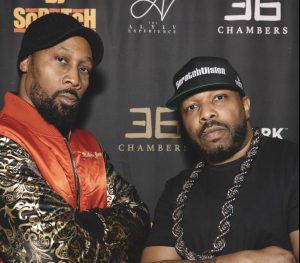 The two rap icons’ collaborative album is inspired by their love for martial arts. The project serves as a love letter to the kung fu movies that ran on local television channels every Saturday when there were only five options.

“We named it that because we are flashing back to the days when we were young men coming from Brownsville Projects, then moving to Staten Island moving to Park Hill, Killa Hill,” RZA shared to the crowd on their inspiration for doing the album.

“It took us to a place far far far away, because we have never been to China. We have never been to Thailand…and we saw men protecting women, fighting oppression. We saw chivalry and one man taking down 20 men, breaking bricks, using num-chuks,” added RZA.

“It was an honor to produce and  executive produce an entire album for a legendary MC, who happens to be one of the greatest Hip Hop producers of all time. This album is like a movie. The first track gives you the synopsis of the movie. The beats & the videos we shot will take you back to when you couldn’t wait to turn to channel 5 every Saturday at 3 pm to watch Saturday Afternoon Kung Fu Theater. I’m proud of this project and I can’t wait to perform these songs live.”