Curren$y plays five songs on NPR’s Tiny Desk, combining three of his passions: automobiles, cannabis, and music. Curren$y plays fan favorites like “Sixty-Seven Turbo Jet,” “Address,” “Breakfast,” “Airborne Aquarium,” and “Mary” over the instrumentals of a live band against the backdrop of a 1965 Chevy Impala.

You can see the entire performance below.

I don’t know if you’ve noticed yet, but it’s April 20, and I’m sure you know what that means (although what with the traditional festivities endorsed for this unofficial holiday, you’d be forgiven for not knowing what day it is anymore). So it’s only right that for this week’s Tiny Desk Concert debut, NPR has tapped one of hip-hop’s patron saints of the devil’s lettuce, Curren$y, who stops by for an at-home set from a garage alongside one of his many, many cars (this one’s a lifted 1965 Chevy Impala).

Of course, with so much music in his rearview — over seventy projects and counting — the New Orleans native has plenty of product to pull from, opening the set with “Sixty-Seven Turbo Jet” from 2012’s Cigarette Boats with Harry Fraud. Then, it’s “Address” and “Breakfast” from 2010’s Pilot Talk, “Airborne Aquarium” from Pilot Talk II, and finally, “Mary” from 2013’s New Jet City. It’s kind of mind-boggling to think he could have done a ninety-minute set without crossing 2015.

Early in the set, he teases his band for not having their own 4/20-inspired products on them, although he allows that all three members of the trio need both hands to keep the music going. 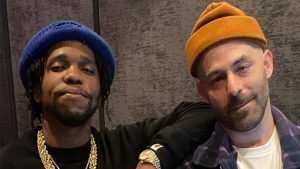 The ever-prolific Curren$y has teamed up again with super-producer The Alchemist for their new joint collaboration album in the 13-track Continuance release which dropped yesterday via Jet Life Recordings / ALC. After being pushed back a few months from its originally slated expected 2021 release, this new drop also features Havoc of Mobb Deep, Wiz Khalifa, Boldy James, Styles P, Babyface Ray, Larry June amongst others. The release of “Continuance” was preceded by two singles, “The Tonight Show” and “Half Moon Mornings,” both released earlier this month – watch below.

Continuance is their fifth collaborative project together, with their first one stretching back now over a decade to 2011’s 10-track “Covert Coup” that also featured the late great Prodigy of Mobb Deep (RIP), a then young and emerging Smoke DZA, and Indiana’s Freddie Gibbs before he gained significant attention. Curren$y and Al have since gone on to release “The Carrollton Heist” feat. Styles P of The Lox, Action Bronson and Lil Wayne in 2016 (plus the remixed version), and the now-classic triple threat also with Freddie Gibbs in 2018 “Fetti” amongst many other features.

The combination of Spitta and Alan The Chemist seems like it could never disappoint, and the continued quality output is a testament to their deep talent and consistency. Overnight they have released their latest film clip to support the drop of the album, in the short but sharp “Obsession” – watch below.

The post New Curren$y and The Alchemist “Continuance” Album Out Now appeared first on The Source.