One thing about Cardi B? She’s always going to manage to keep us laughing. Even though she’s in some legal trouble after failing to complete her 15-day community service sentence, the mother of two still got an extension from the judge – and was looking fabulous while doing it.

Earlier this month, the “Bodak Yellow” rapper found herself back in court. After pleading guilty to misdemeanour assault charges last fall, she had to complete half a month’s worth of public aid. It remains unclear specifically why she failed to meet the requirement. However, it’s been said that mourning Takeoff’s untimely death may have had something to do with it.

Thankfully, Cardi now has until March 1st to finish her sentence. If she failed to follow through this time, jail could be in the cards. Needless to say, the 30-year-old wasn’t willing to take that risk.

On Friday (January 20) morning, the Bronx baddie shared a mirror selfie flaunting her luxurious outfit of the day. Her long black hair is worn down in loose waves, and a ribbed, beige sweater hugs her curves. Bardi’s bottom half is clad with patchwork jeans and a pair of Margiela Tabi boots.

“Second day of community service,” she wrote in the caption. “Obey the law.” By the goofy look on the Grammy winner’s face, you can tell that she’s doing her best to make light of the situation.

While her Twitter feed has obviously been active today, it’s been a few days since Cardi posted on her Instagram. Earlier this week, she dropped off a photo dump that finds her in hot pink glam with glamorous honey-blonde hair.

Jason Lee appears in some of the later photos. The Invasion of Privacy artist is the first guest to appear on his new REVOLT podcast. During their interview, the fashionista got candid about her own plastic surgery journey, as well as what celebrities she’s gotten recommendations from.

Additionally, Cardi B revealed how she and Offset found out about Takeoff’s passing. Read more about that here, and check back later for more pop culture news updates. Stepping into her second day of community service after a court granted her a second chance to finish, Cardi B shared a photo of herself getting ready. She has until March to complete 15 days of service. The “Hot Shit” artist tweeted,  “Obey The Law,” with a photo of her getting ready for her second […]

Hollywood Unlocked founder Jason Lee has set off a new venture with help from Cardi B. The Jason Lee Show arrives courtesy of Revolt and recently shared its premiere episode with the Grammy winner. This conversation was anticipated due to Lee and Cardi’s personal friendship, and the rapper detailing opinions that she may have otherwise avoided with other platforms.

There are several takeaways from Cardi’s interview, but fans paid close attention to her responses about ongoing harassment. “I’m afraid to be vulnerable because people wanna say, ‘Oh, you looking for sympathy,’” she said.

Read More: Cardi B Explains Why She Didn’t Address Rumors About Offset & Saweetie

“In 2019, I really—I felt like I was like, somebody dead inside a body,” Cardi continued. “I kept telling people, ‘I just wanna die, I just wish I was dead, I wanna be dead.’”

She said she “couldn’t escape” her mind. Offset did his best to help by taking her away from the chaos, including a vacation to the Dominican Republic.

“People from my management was calling me,” Cardi also stated, noting they were concerned. “It was really bad. It’s terrible when people are making fun of you.”

Read More: Cardi B Didn’t Submit “WAP” To Grammys Because Of The Internet

Cardi brought up the false reports about her having herpes. This was later proven to be untrue in court, but the rapper said it was terrible seeing the world take the rumors as factual.

“I wasn’t a celebrity,” she added. “I was somebody that really wanted to be dead.” Cardi said during this time, it was difficult to be an attentive mother or wife. “It just made me cry. It was a point that I felt like I was so weak of a person that I was [too] weak to be a mom.”

Read More: Cardi B Explains Decision To Get Cosmetic Surgery

During this time, Cardi shared that the public was simply under the impression she was “crazy” and “ranting.”

Check out her full interview on The Jason Lee Show below.

Cardi B didn’t hold back on her appearance on The Jason Lee Show for the debut episode. About cosmetic surgery, she argued: “I just be feeling like, if I wanna correct something, I want to do a little something-something, I don’t give a f*ck: I’m gonna do it. I like being perfect, I like a certain type of body for myself, and if I want to do it, I do it.”

She also touched on awards. The rapper has one Grammy, but she could’ve likely gone more if she’d submitted her and Megan Thee Stallion’s iconic anthem “WAP” to the Recording Academy, but she didn’t. “You know what?” she said. “This is something that — it’s like, I need to stop letting the internet control my life. Because I didn’t want to submit ‘WAP’ because I was afraid that if I win or if I… you know what’s so crazy? The internet got me even afraid of winning. That is insane.”

“WAP” got a lot of predictable backlash from conservatives during its release. Ben Shapiro’s reaction was probably the funniest, as he read it line by line in disbelief, not realizing it would end up memed forever.

Watch the episode above.

Cardi B looks different now than she did years ago, and that’s thanks in part to plastic surgery. Cardi doesn’t shy away from discussing the work she’s had done, and the topic came up again on the recent debut episode of The Jason Lee Show. During the chat, she shared her thoughts about critics who say she and others go under the knife because they’re “insecure.”

Explaining why she’s been relatively absent from the public eye after having her latest baby, Cardi said, “I didn’t wanna pop out after I had my son, because I told you I wanted to get my body done first. And it’s like… a lot of people thought that when I gave birth, I automatically went to do surgery. No: I literally waited like seven months to do surgery, because you have to.”

Then she was asked about the recent work she’s had done and she replied:

“I always wanted to do certain things. You know, like, a lot of people… and that’s the thing, the tricky thing about a lot of people, right? People be assuming that when you do surgery or something, you’re insecure about yourself or you hate yourself, and that’s just not the truth. I just be feeling like, if I wanna correct something, I want to do a little something-something, I don’t give a f*ck: I’m gonna do it. I like being perfect, I like a certain type of body for myself, and if I want to do it, I do it.”

Lee also brought up a time he and Cardi were at Kris Jenner’s house and Kim Kardashian gave Cardi some plastic surgeon recommendations. Cardi noted that she did call a couple of those doctors.

Check out the full interview above. The plastic surgery talk begins at 2:55 into the video. 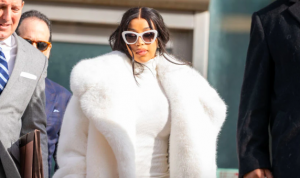 Back in September rapper Cardi B pleaded guilty to arranging an attack on two bartending sisters, one of whom she believed was having an affair with her husband rapper Offset. She settled a plea deal that including no jail time and 15 days of community service which she failed to complete by this Tuesday. Once again, Cardi has been given another chance by receiving an extension to complete her community service.

Rapper Cardi B has been given an extension to complete her community service stemming from an assault at a Queens strip club in 2018.

The Grammy Award-winner appeared before a judge on Tuesday. She now has until March 1 to complete 15-days of mandatory community service she received as part of a plea deal.

The 30-year-old, whose real name is Belcalis Almánzar, was accused of ordering an attack on two strip club bartenders. She pleaded guilty to misdemeanor assault charges.

Cardi B was supposed to complete her community service by Tuesday, but so far, had not done any of the required time.

The post [WATCH] Cardi B Given A Second Chance to Complete Community Service appeared first on The Source.

The post Cardi B Gets Extension On Community Service appeared first on SOHH.com.

Cardi B is a busy person, as you can probably imagine. In addition to working on her second studio album, the workaholic mother of two has also been filming commercials for the Super Bowl, dealing with court cases, and running a few businesses. Unfortunately, all that apparently left little time for her to complete the community service required of her September plea deal in the 2018 strip club assault case against her.

This presumably is why Cardi found herself in court in New York City yesterday receiving a two-month extension on her 15 days of community service. Tuesday (January 17) was her original deadline but according to People, she hadn’t gotten around to completing any of the requirements while running around making surprise appearances at shows for Bad Bunny, GloRilla, and Lizzo, to say nothing of mourning the death of the late Takeoff, who was her husband Offset’s literal family.

Today I hate everyone ,try me tomorrow. pic.twitter.com/RVLAeBQ8KV

In a statement, Cardi’s attorney said, “Personally and professionally, Cardi is dedicated to community service and charitable endeavors. She therefore appreciates the court giving her until March 1 to complete her community service commitment in Queens, New York.”